It now comes to light that Ian Tomlinson died from internal bleeding after being assaulted by a police officer, manslaughter charges have been brought. I saw the following picture today, a spoof on the posters that the Met have put up trying to make us paranoid and telling us to effectively spy and inform on our neighbours. There have been several other spoofs, trying to highlight the ridiculousness of these posters, but the following brings a much more sombre warning. I have no idea who to credit for this, but I think it’s very well done. 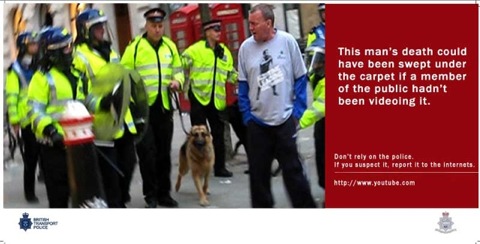